The MACD is a buy and sell signal generator...which means it can tell you when to buy shares, and when to sell shares.

MACD is an abbreviations for Moving Average Convergence Divergence. I've always heard it pronounced as "MAC-DEE". 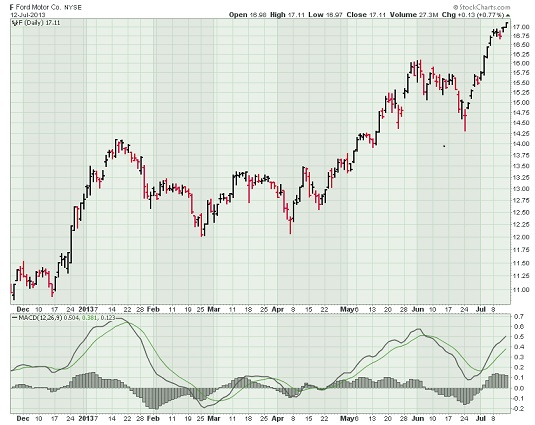 The standard settings for MACD EMAs are 12-periods and 26-periods. I use periods because you can use the MACD on daily, weekly or monthly charts, which could mean 12 and 26 days, weeks, or months!

By comparing differences in the change of that line to an average, an analyst can identify subtle shifts in the strength and direction of a stock's trend.

MACD(x,y,z) is a common format for describing the periods you're using. For example, if you selected an standard MACD for a daily stock chart, you would get see MACD(12,26,9) on the chart.

How to Use MACD

You can also adjust the sensitivity of the MACD.

When NOT to Use MACD

The MACD is NOT good for identifying when a stock is overbought or oversold.

In addition, the MACD is calculated using actual prices, so you cannot compare MACD values between different stocks.

If you want to make a comparison, you need to use an indicator that uses percentages (such as the Percentage Price Oscillator).

How to Interpret MACD Signals